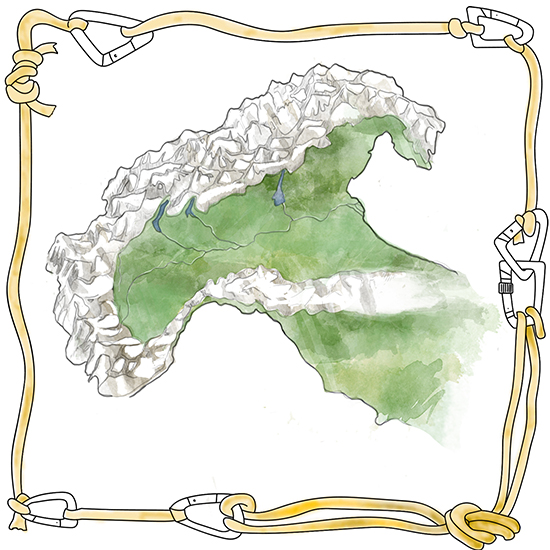 Among the most remarkable mountain systems in the world and the most important in Europe, the Alps represent the very emblem of the mountains, to the point of giving origin to the Italian term for mountaineering: alpinismo.

The Alps, “a country where the deep sky, tired of being blue, laid down on the mountain" as Boris Vian wrote, boast numerous peaks over 4000 meters - Mont Blanc, the highest, is 4809 meters high - and extend from west to east for about 1200 km. These are Vitale Bramani’s mountains, this is the land where his passion for mountaineering takes shape, and it is here that his intuition leads him to invent the Carrarmato sole.

His first noteworthy climb, when he is only seventeen years old, is that of the Spaccatura Dones, on the west face of the Torrione Magnaghi Meridionale (2040 meters). The following years see a chain of mountaineering successes; among the most significant, the climbing of Col sans Nom (3300 meters) with Eugenio Fasana in 1923, followed, only a year later, by that of the Torrione dell’Orso in Val Camonica with his friend Elvezio Bozzoli Parasacchi.

After conquering the Western Alps in the 1920s, in the 1930s it is the turn of the Eastern ones with Ettore Castiglioni: the Cima d'Angheràz on the Pale di San Martino, the Torre di Roces in the Gruppo Sella are some of the peaks conquered by the couple. In 1937, Vitale Bramani reaches a double goal: he conquers the 3,308 meters of the north-west face of Pizzo Badile in Val Bragaglia, successfully testing the first Vibram Carrarmato sole.

From that moment on, the Vibram (soles) will be the support of the most important achievements of the Alps. One year after their consecration, Riccardo Cassin chooses them to successfully climb the northern spur of Punta Walker on the Grandes Jorasses; in 1955, it is Walter Bonatti who wears boots with Vibram soles in the first solo ascent of the West Pillar on the Petit Dru; in 1961, it is the turn of the first winter climb of the north face of the Eiger, conquered by Toni Kinshofer, Anderl Mannhardt, Walter Almberger and Toni Hiebeler. In the Alps, the Vibram soles have conquered all the most important mountain ranges in the world.